The newly elected executives of the Students’ Union of Moshood Abiola Polytechnic, Abeokuta for the 2018/2019 academic session, has been sworn-in amidst funfair amongst the students. 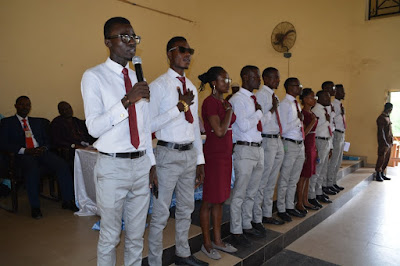 The ceremony, which had in attendance the Institution’s Rector, Dr. Adeola Odedina and other Principal Officers was held at the Ramotu Ibironke Babalakin Auditorium of the Polytechnic.
In his remarks, the Rector congratulated the Directorate of Students’ Affairs, Students’ Union Electoral Committee (SUELECO) and all members of staff and students of the Polytechnic for their dedication and commitment which gave MAPOLY the most peaceful election in the history of the institution.
He charged members of the new executive to explore all avenues that will promote peaceful co-existence among members of the Polytechnic community and Government.
Odedina reiterated the Management’s resolve at producing quality teaching and learning environment for students of the Institution. He described the occasion as “Celebrating New MAPOLY with Brand New Executive”.
The Rector specially recognised the effort of a student, Obadimu Samuel of electrical/electronics department who produced a world-class sound system used at the inauguration for his ingenuity.
Dr Odedina promised to recognise and celebrate success and achievements among students, he approved the work, henceforth, to serve as his official podium.
He assured the innovative student and his supervisor a great recommendation and reward by the Management and further urged other students to emulate excellence in their careers.
Similarly, the Rector, who was described as the most friendly head of institution by the past students’ leader, pronounced the extension of payment deadlines for all categories of students for the 2018/2019 academic session to the joyance of the students at the event.
The deadlines, which were earlier fixed for Friday, 21st and Friday 28th June, 2019 for Fresh and Returning Students respectively, were extended till Friday, 5th July, 2019.
He further declared in his magnanimity that there would be no penalty on payment of school fees for the session for all categories of students.
The Students’ Union President, Comrade Samson Omoniyi (aka Heritage) of the Department of Mass Communication, who was very thankful of the gesture promised to identify and tackle the challenges facing all students on campus.
He also revealed his mission to unite, embrace dialogue and enforce discipline amongst his colleagues.
On the cynosure at the event, the President officially announced his branded regime slogan which is “together, A NEW MAPOLY IS POSSIBLE”.
Other members of the Executive are:
Obadimu Samuel (Vice President), Olajide Kaosarat (Gen Sec), Olayiwola Surajudeen Olayemi (Asst. Gen. Sec.), Adeyemo Damilola (Fin. Sec.) Olajide Idris (Treasurer), Johnson Idowu (PRO), Jayeola Oluwaseun (Welfare Director), Morenikeji Folorunso Michael (Social Director), Orenuga Opeyemi (Sport Director).

Adeyemi College of Education Ondo (ACEONDO) has released a circular to notify all students on the registration of courses for the 2018/2019 academic session. See more details below. Share to Unlock Contentimage/svg+xml Unlock Sugar Mummy […]

Moshood Abiola Polytechnic MAPOLY Sets 2018/2019 Departmental Cut Off Mark and Point For All Courses. See below to check individual courses and departments. The school official website. www.mapoly.edu.ng What is MAPOLYJAMB Cut off Mark The […]

Disclaimer: The contents in this site were created to entertain our readers. If you want to take down any post down from stepfamous.com.ng kindly contact us for immediate action. For more legal right read our Privacy policy